Click on “Présentation de la commune” return to the menu

The village of Crissay sur Manse

Crissay sur Manse is a mediaeval village, situated in the Manse valley, in the heart of Touraine. The village has retained its character from these earlier times. Its beautiful dwellings, built from the local ‘tuffeau’ stone, and its narrow streets, justify its classification as one of « the most beautiful villages in France. » 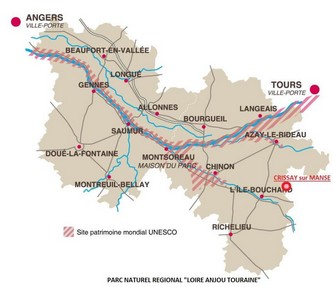 At the extreme east of the Loire, Anjou Touraine national park, Crissay is one of the smallest villages of the Indre and Loire region, with 117 habitants (2014) and a surface area of 750 hectares.

Situated 18km from Azay-le-Rideau (via the D757), 22 miles from Chinon (via the D8) and 13km from Sainte Maure de Touraine (via the D21 and D210), Crissay mixes culture with a good way of life. Within the village you will find a shop opposite the church, which sells honey and ‘pain d’épice’ (a spiced loaf) and a goat’s farm in the Gruteau area selling delicious goat’s cheeses (24 hours a day as there is a vending machine for when the shop is closed). There is also a local wine merchant, whose business is situated in one of the most buildings of the village, built at the end of the XVth century. There you can sample the Chinon wines and the excellent and reputable Chardonnay. The terrace at the Auberge (Bar/B&B) offers one of the most beautiful views of the Manse valley. There you can taste the delicacies of the Touraine region. 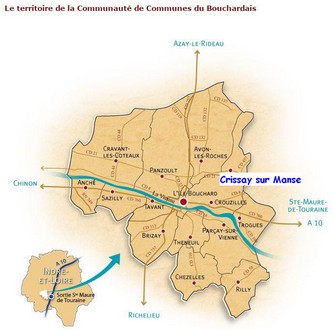 A shrine to the 100 years’ war, Crissay was developed in the XVI century and still has superb buildings dating from this era, and ancient streets where you can stroll in an air of calm and serenity. Its chateau, now in ruins, belonged to the Turpin family of CRISSE for six centuries. This shows the former grandeur of the village. The church of St Maurice, listed since 1926 amongst the most historic monuments, was built by Jacques I and Jacques II Turpin of CRISSE in the XV and XVI centuries. The funeral recess of Catherine of BELLAY is situated within its walls. The church is a model of the flamboyant gothic architecture.

Even if the weavers, like most of the previous craftsmen, have now left Crissay, you can still find a library with examples of ancient books, and a studio selling collages and paintings.

Along the banks of the river Manse, the XIX century ‘lavoirs’ (washing places) have recently been restored, thanks to the heritage foundation. Situated at the foot of the village and in the Gruteau area, they frame the Grand Moulin (water mill). 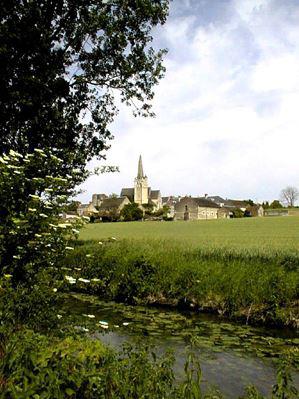 There is a stone cross in the cemetery, which dates from the end of the XV century, which is listed amongst the most historic monuments.

Away from the centre of the village, which was surrounded at one time by ramparts, you can still find some farms which have large buildings which were constructed in the XIX century, whose facades of tuffeau stone contrast with the former troglodyte dwellings – used for domestic or agricultural purposes.

The activity of the villagers of Crissay is largely agricultural (crops, wine, honey, goat husbandry) and tourism (bar, B&B, gîtes). After having a steep decline in the population at the beginning of the XIX century, the population of the village has been stable for some years. Most of the houses are permanently occupied. It is a village where one can live a good life – the proximity of small towns only a few kilometres away providing the usual daily requirements.

Click on “Présentation de la commune” return to the menu